Your info will not be visible on the site. After logging in for the first time you'll be able to choose your display name.

What did I do wrong?

Two weeks later:
You was practically attracted by Kai's good look , you're hater become your secret crush , even tough he never talked to you since that day but it was his charm he became your secret crush, and because you hated him and liked him at the same time , you decided to erase your feelings and focus on your studies.

In the afternoon, at the science hour :
-Teacher:" We are going to do another science project , that should be released for the next week (disturbing pieces of papers to the students) .At those papers, you write your names and give it to me ;) back , I'm going to pick two papers randomly , the persons who write their names will work on pairs for the project , remember you have a week "
The students wrote their names and gave the pieces of papers to the teacher , he first pick two papers randomly it was Chanyeol and Baekhyun ;) then he picked two other papers by luck it was you and Kai !!
You thought * OMO *.* I'll work with him for the science project ?? ottokaee? *
The bell ringed and you took your bag and herd to your house , while you were waking you felt that you're followed , you panicked and thought it was a thief until he touched your shoulder .
Kai:"you!!!"
You:was you !!! what are you doing here?"
kai:"I forget your name so I followed you , to talk about the science project , can you do it (he wanted to say if she can do it by herself)
You:"No , I won't !!! we both need to do it "
Kai:(saying in low voice ) She caught me -_- , Okay let's meet Saturday at 2PM ;) in front of the school build" He said coldly and left "
You"School ?? there is no school at saturday "
Kai: (Turned back and said walking) Silly we'll go to my place
He left and made a sexy smirk , that you felt your fast heart beating

hey guys !! ^^ this is my second update hope u liked it ^^
btw today ids kyungsoo's birthday ommg I'm so happy for him, 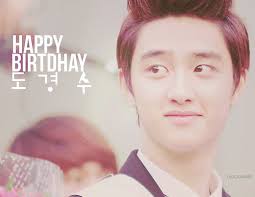 When will you update?? T^T